A note from Gus: The following story is from the Dog Days Enquirer a squirrellous publication…. I am completely innocent of alls the alleged allegations.  (The soon to be discovered spot on the carpet incident, however, I takes full responsibility.)  The D.D Enquirer treats me wrong… Ooooohhh!  Did I say “treats?”  I too like treats.

The hottest gossip on canine celebrities and entertainment is sniffed out here!!!

Savannah, February, 24 — Noted travel and history blogger, Gus Doggy Dogg was busted yesterday as he allegedly defaced private property.  The dry-erase ink was still wet when Doggs mother, Mama Becky, walked in and found the tragic scene.  “He really is a good dog,” she said.  “He is scheduled for obedience training at PetSmart next month.  It will not come too soon.”

“The graffiti covered approximately one-forth of the refrigerator,” said Jims who describes himself as the Chihuahua’s caretaker, friend and adopted father.  “I  was devastated.”

“My wife, Mama Becky and I have worked to prevent this type of thing occurring,” Jims said.  “Things like begging at the table or barking at the lady who lives upstairs… She is his great-aunt for heaven sake!  We have gently discourage such activity.”

Jims stated that Dogg claimed that he was, “set up,” and that he was simply trying to erase the images.   However, eye witnesses are holding to their accounts. 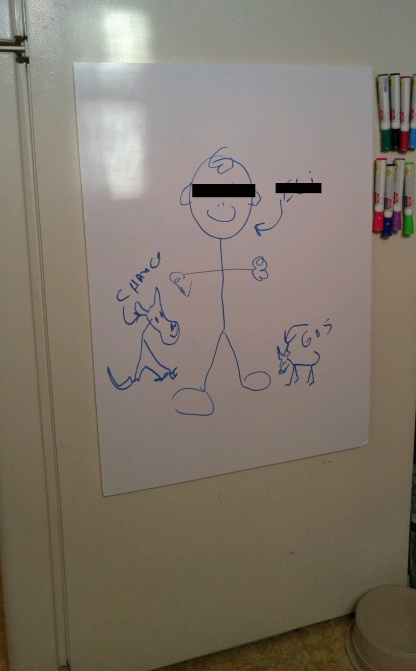 The graffiti was condemned by authorities who cried, “Bad Dog!” while some in the art world disagree.

“I’m not sure where I went wrong,” Jims said.  I tried to raise him to have respect for others… you know.  But, he is very advanced for his young age…even in dog years.”

Attempting to regain composure, Jims continued, “I really don’t know what to do.  Young kids… or rather, dogs…, have all the bad influences, TV, dog treats, bones and stuffed toys.

We even bought him his own bed and water dish.  What can a parent do?” Jims asked then added,  “He is constantly playing with his friend, Bunny.  Maybe he’s the bad influence in his life.”

Bunny, aka Fetch, was allegedly detained by Savannah P.D. for the distribution of egg-shaped containers to children in the spring of 2017.  According to anonymous sources, the colorful eggs were said to have contained candy and toys.  No charges were filed in the incident.

The defaced property depicted Dogg’s cohort and cousin, Chance, who is also a rescue dog of questionable ancestry.  Chance is in the care of a young man who will remain nameless since he is a minor.  However, on the record, Dogg has often referred to him as, “My good buddy.”

Authorities believe that the two were not involved in the incident, though a typical Washington, DC anonymous source reports that Chance may have suggested that the grievous action, “Might be fun.”  Also depicted on the refrigerator was Dogg himself in a staggeringly accurate likeness, according to art experts.

An actual photo, left, and Dogg’s self portrait, right, “Show uncanny, insightful reality in tone and stroke.  It’s hard for me to tell the actual photo from the drawing,” said Izzy Sirius, founder, MOSOAAOS.

Izzy Sirius, the founder and instructor at the Mail Order School of Art and Other Stuff in Las Vegas, Nevada disagrees with most critics by saying the images that were scrawled on the refrigerator are remarkable.  “This work is in the category of Picasso, Man Ray and perhaps Van Gogh… at least on one of their less-remarkable days,” he said.  Sirius clarified his statement, “I mean, Dogg has great artistic talent.  I would gladly enroll him in our school if someone would pay the extremely high-priced tuition.”  The self-proclaimed art aficionado added, “I hope that the Savannah School of Art and Design doesn’t find him first.”

Dogg was allegedly caught by paparazzi while allegedly leaving a kennel show at the Dog Patch Lounge on Skidaway Road in Savannah, Georgia shortly before the alleged dry-erase incident.  Photo credit:  ©Noah Scruples, 2018

Holding back tears Mama Becky, Dogg’s mother, later stated, “I just hope it’s not too late… He is quite small for a dog, but I have always told him that he is as good as any Rottweiler or Great Dane.  We never discriminate.  We always uplift.  Maybe we should go on walks more often.”

The grief-stricken mother sobbed then added, “He really has been a good dog.  I hope he can learn from this and we can continue on.”  Wiping tears with a wet wipe she keeps for “accidents” she stated, “We have always given him love and affection.  We even praise him for going potty in the right places.  It doesn’t always work… I guess I should have seen this coming.”

Authorities stated that there will be no charges in the alleged crime, but now Dogg is on their watch list since he was found with no collar, harness or form of ID in his possession.

The original, simple four-sentence, written rebuttal by Gus Doggy Dogg.  The translation can be seen below.

When asked his opinion of the accusations, Dogg gave a four-sentence, written statement to the press that had to be translated, “I has no bones to pics over this devious attempt to defrauds me.  Oh… oh…, I too like bones… and treats!  And, I too like Dog the Bounty Hunter!  He is my hero!”

Reality TV star Duane “Dog” Chapman could not be reached for comment.  He is not implicated in the alleged incident.

A note from Gus:

I thinks this is what Jims calls a parody.  Likes I said, I is innocent of all the allegedx allegations.  However, as stated before, in the upcoming charges in the “carpet” incident I accept all blame.  No dog is perfect.  I will goes into rehab until this whole incident blows over.

Therefore, this review gets only one paw.  I would give it thumbs down except that I don’t have thumbs!

If you are a little kid you can send me a drawing and I will put it up over my bed… or even if you are a big peoples… and maybe I can put your drawing on my dogg blogg.

Thank you.  Please like and subscribe to my dogg blogg and I will give you licks and wags when I see you.